A Humorous potted history of the humble beginnings of Perranporth Rugby Club in 1962. Edited from an article written by Colin Brewer for the Perranzabuloe Museum newsletter in the early 2000's. 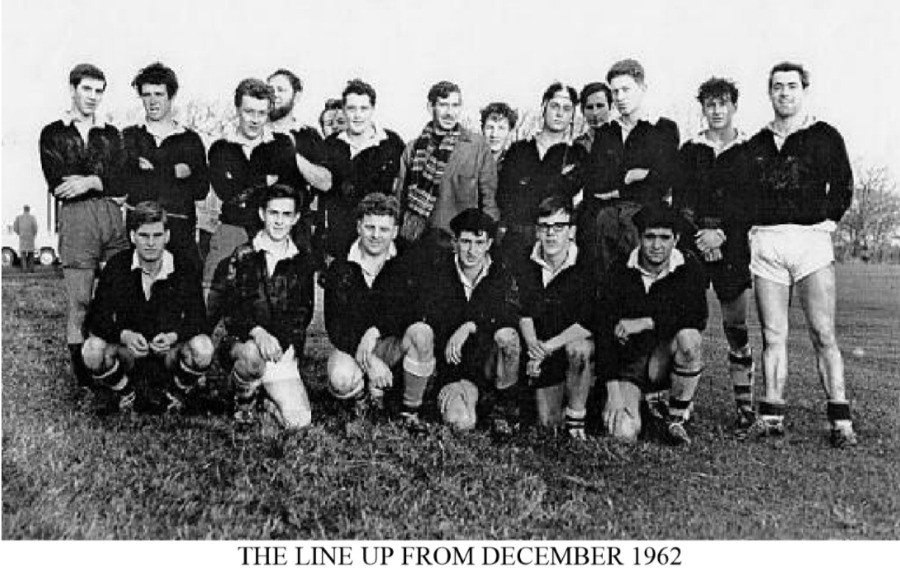 In 1962 South African, Don Russell took over the Galleon Coffee Bar. Don was a rugby football man and had represented the South African Air Force playing against the RAF in Italy during the Second World War. There was no rugby team in the town, so Don managed to cajole a number of lads, who had only previously played rugby at school and convinced them to form a team. The inaugural meeting of the team was held at Droskyn Field car par.

There were problems, there always are! But nothing is insoluble! No kit, no pitch! Little things like that that can get lesser men down! But fortunately, not Don Russell. The club was a family affair, Ellis Leah, the new club’s treasurer was Don’s brother-in-law. More importantly Ellis had a garage near the top of Reen Hill, ideal to change in with a cow field just over the hedge behind some kennels.

Initially named The Perranporth Pirates the name was quietly dropped after confusion with the other Pirates rugby team in the county. As a consequence, Perranporth Rugby Football Club was formed. The clubs ‘non-de plume’ the Brewers did not appear for a number of years, compliments of Graham Bidgood.

The first competitive game that the club ever played was on December 22nd 1962 against a Truro XV, away! The pitch problem was solved. The CRFU loaned Perranporth a black strip, so they now each had a shirt on their backs. They convincingly beat Truro III XV 35 points to nil, remembering tries were only three points in those days. That first ever team was studded with stars, ex Redruth winger and Cornwall Schools player Brian Mitchell came out of retirement and John Cox, once a Mosely forward was also recruited. Those that represented Perranporth that cold December Saturday in 1962 were Ian Pearce, Adrian Greet, Angus Eason, David Gardener, Barry Watkins, Nick Beringer, Chris Harding, Charles Thompson, David Crabb, Colin Julliff, Roger Pearce, Ernest Hooper, Brian Mitchell, Chris Miners, Bernard Probert and Raymond Trebilcock. Don Russell and his son John are also in the photograph.

The squad boasted about twenty players which were frequently complimented by up to 11 players of colts age.

It seemed the early games were based around their formidable pack, the backs were on the field to make up the numbers! Under Don’s tuition they developed a more open style bringing their fast young three-quarters into the game much more frequently. Their first ‘new style’ game was against RNAS Culdrose, who they beat 14-5.

Now Don had learnt his rugby at College in South Africa, so it was only fitting that when Perranporth RFC finally handed back its borrowed strip they proudly took the field in the green and gold hoops of South Africa, minus the springbok! The club still plays in an approximation of the South African colours in both its senior and youth teams.

The first club committee was formed under the chairmanship of Donald Healey. High on the list of priorities was fundraising and where the club was going to find a pitch. The pitch problem was a recurring nightmare for the first twenty years of its existence until they got a settled home on the reclaimed marshland at Ponsmere Valley.  The team played at various locations around the parish over the years, Rose, Reen, the airfield, the list is long, not quite endless and definitely not illustrious. Sometimes they were at a pitch for only a few weeks. There was a theory circulating at the time that if a local farmer wanted a new field gate off the road, he’d offer the field to the club, they prepare the gateway and then after a few games the pitch would be required for agricultural purposes.

In that first season invaluable help was received from both the CRFU and Truro RFC. Fixtures in those early years were against clubs no longer familiar to fans in the County,  Holmans, South Crofty, Redruth GSOB’s, Lanner, Falmouth One and All & Redruth Highway.

The clubs great adventure, and still talked about with awe, was ‘the American tour’ which took place in February 1978. One of Perranporths’ visiting players was a young American student. He managed to get an invitation to a rugby tournament in Tulane, New Orleans. This was an inter university tournament so how he secured that is a mystery! After much fund raising twenty players went. The young American, at college in England at the time couldn’t afford the two weeks off for the tour but flew back to the States just for the weekend of fixtures. Perranporth lost one game but won two. Pete Dodson helped train Bucknell, the eventual beaten finalists. Nick Beringer’s cartoons were presented to opposing teams and well received, undoubtedly, they still adorn the walls of the American College Rugby club.

In the late 1980’s and the very early 1990’s the club went through a lean patch. Men like Bob Job did much to ensure the clubs continued existence. The dozen or sometimes less players that turned out in the Perranporth strip honoured their fixtures, more or less, but not surprisingly they were invariably thrashed, cricket scores were the order of the day!

The club kept going and managed to recruit a number of charismatic players and others followed. Suddenly in the early 1990’s away teams feared their visits to Ponsmere Valley. The Brewers were playing an open attacking game of rugby football, quality sides were getting rolled over by The Brewers for their troubles. They feared no one, during this ‘purple patch’, only the top Cornish sides could fixture Perranporth with any confidence.

In 1993 The Brewers made it through to the quarterfinals of the Bass Senior Cup and entertained the then mighty Camborne at Ponsmere Valley. Although losing, they gave the cherry & whites a run for their money.

League rugby football was introduced in Cornwall in the 1990’s and non-league Perranporth was regularly defeating teams from the bottom three divisions. The decision was made, the club would join the leagues.

The club had led a truly nomadic existence for much of its early life, then a degree of stability entered onto the scene. Perranporth Sports and Social Club finally gave them a rugby base although far from perfect.  Unfortunately, that did not last, and the club was without a home again.

The Bolingey Inn briefly became home base and then followed a more stable and reasonably convenient compromise, Failte campsite, a bar, showers, even a pool! But even here wasn’t truly home . Following much hard work by a dedicated few, perhaps Nick Lewis deserves a mention here, a package of funding was obtained and after a little arm twisting the Parish Council were convinced to release the site, and the Perranporth Rugby Football Club had its own, its very own, clubhouse, The Droop.

The season started early the year the clubhouse was built and on Sunday 23rd August 1998 the new clubhouse, was officially and fittingly opened by Don Russell’s widow Mrs Avril Russell. A Cornwall RFU XV were entertained.

In 1997 the club’s first official trophy was grabbed, on the field of play!  They won the Plate, the Cornish Junior Cup.

Two seasons later they repeated that performance and in addition finished top of Cornwall Division 1. The small village side had gained promotion to the Devon and Cornwall League.

This proved an unhappy time at the club with the side winning only two league games through the season, though they came within a point of other victories on a couple of occasions. After only one season up with the ‘big’ boys the Brewers were relegated back to Cornwall 1. The season 2000/2001 proved a salutary and costly excursion away from our home pastures.

We will see what the years ahead hold but there will, I hope, be a long and fruitful future for the little club that kicked off in the Galleon coffee bar those 56 years ago.

We thank Colin for providing this interesting and humorous account of the humble beginnings of the club. You can see his full article by following the link at the bottom of this page.